On this thoughtful day I would like to share with you one story that we have discovered over the few months that project has been running. I would also like to think of all the fallen on our Plaque, from the First World War and all conflicts before and after.

The following words and research are by James Gasston, a Volunteer Researcher on the Boys on the Plaque Project.

Gerald Harry Vernon Burghope was born in Brighton on September 19th 1896, to Harry and Ethel Burghope of 6 Highcroft Villas. The oldest of three children, he had two sisters; Gwendolyn was born in 1899 but died before her first birthday, and Audrey was born in 1904.

His Father and his uncle John owned Burghope and Burghope, a tailors and outfitters at 139-140 North Street (now Barclays bank).

Gerald joined the 19th Royal Fusiliers as a private, before transferring to the 1st battalion of the Queen’s Royal West Surrey Regiment. He was made a temporary 2nd Lieutenant on the 5th of August 1916. A little over eight months later, on the 23rd of April 1917, he was killed in action in France, where his body remains. He is commemorated on the Arras memorial at Fauborg-D’amiens cemetery, and at the family burial plot in St Martin churchyard in Westmeston, just outside of Lewes.

I gleaned that information from various online genealogical resources, but none of it really told me anything about who Gerald was. It wasn’t until we visited The Keep, which houses hundreds of years worth of records relating to East Sussex, that I felt I gained some insight into that. He was a keen poet, and The Keep holds a book of his poetry, published after his death in 1917. On the second page is a photograph of Gerald in his army uniform, and the introduction is written by the Reverend Felix Asher, who was incumbent at the Holy Trinity Church at the time and a friend of the Burghope family. The following extract from ‘A Vision of Home’, which Gerald wrote in May 1916, having already enlisted, is sadly prescient:

‘O, if your lonely tomb, my friend, lies far beyond the foam,

Then be content, your body rots, yet you yourself come home,

…He could not tread an unknown shore, but once again must hie,

To the kindly Weald of Sussex and the Downs that never die.’

A year after this was written, on the 13th of May 1917, Gerald’s memorial service was held at Holy Trinity Church, led by Reverend Asher. 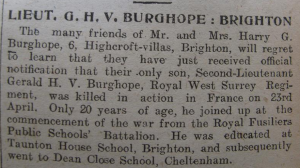 3 thoughts on “Remembering those that have Fallen : Gerald H.V Burghope”